Apple Pay is the biggest news out of Apple AAPL -1.65%’s this season, a mobile payment service  expected to break Apple into the $400 billion business for card processing currently healed by VISA, Mastercard, American Express, and Paypal

These companies currently manage trillion in electronic payment transaction, with this looking like a majority may be shifting to Apple Pay the finance sector could be seeing a multitude of ripples.

Apple’s entry into payments may have pushed eBay to spin off its payments subsidiary Paypal, announced today. And KKR, who owns the biggest card processor, First Data may want to step up plans for an IPO, announced earlier this year right after pumping in 1.2 billion to give the company a little boost.

So is it secure?

Apple Pay is coming to iOS8, iPhone 6, iPhone 6 Plus and Apple Watch this month. Users of iPhone 5S can also use Apple Pay if they buy the Watch’s which also has an NFC chip to handle the transactions.

Below is a summary of the levels of security for Apple Pay.

Level 1:  Touch ID, fingerprint authentication. Users have to press their thumbprint to the phone for verification. This first layer of security will prevent anyone but the phone owner from making a  purchase. Users can disable missing phones with “Find My iPhone.” 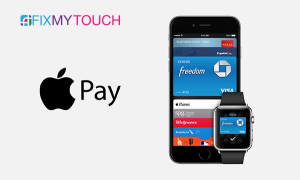 Level 3:  The NFC chip uses “Dynamic Security Codes” for secure communications between phone and the reader. Apple Pay will transmit Device Numbers, not actual credit card numbers to the reader.

Level 4:  Apple’s Watchuses passcodes for transactions. It verifies the user then checks the user’s heartbeat to make sure the watch has not  broken connection with the skin.

Tim Cook, CEO of Apple is stepping out from the long shadow of Steve Jobs to switch your wallet for an iPhone. It’s a secure trade.