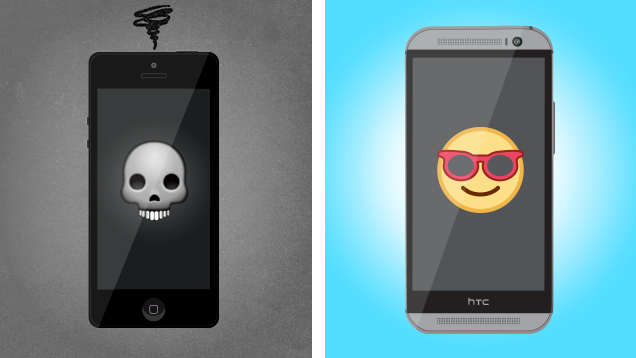 I Ditched My iPhone and Spent the Summer With Android 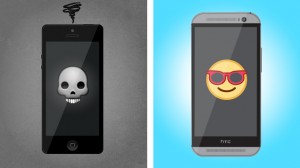 For five straight years, I spent an inordinate amount of time staring at the screen of an iPhone. I’m not alone in that, but I am usually quick to buy new models and even quicker to download new operating system updates. Perhaps I’m a little too quick, because earlier this year, my enthusiasm got the best of me.

Back in June, I bricked my iPhone. I had installed the beta version of iOS 8, because I was so eager to check out the new features. I knew the risks going in; betas are inherently unstable. And sure enough, within a couple of weeks, an iCloud-related bug did me in for good. My phone would prompt me to sign into iCloud every 10 seconds or so. When I went to settings to turn iCloud off, the phone would crash. It was an infinite loop of frustration, but that’s what you get for turning your phone into a test bed.

It was also an opportunity: I snatched an Android phone out of Gizmodo’s gadget closet. More specifically, I grabbed the HTC One M8, a Gizmodo favorite. It would be three months before the new iPhone came out, and I certainly wasn’t going to switch to a Razr. I was going to have to survive on Android.

If you’re thinking about making the jump from iPhone to Android and haven’t spent much time with the latter, my experience might help you decide. Or at least give you something to yell about.

My experience started off on a sour note. Remember the iMessage bug that was infuriating people who switched from iPhone to Android earlier this year? Well, Apple still hasn’t fixed it.

The night that I swapped my SIM card from my crippled iPhone 5 into my sparkling HTC One, I was up to not much. The next day was a quiet one at work, but by the next evening, I was kind of wondering why I hadn’t received any text messages. After about 30 seconds of Google searches I realized that what was going on. If you don’t turn off iMessage before switching phones, Apple’s servers think that you’re still using iMessage, and if your iPhone friends text you through iMessage, that message will disappear into the darkness, never to be seen again. It would beweeks before my texts were sent through the right channels. So my first bit of advice for potential switchers would be to save yourself from iMessage purgatory.

As a coworker would later point out to me, I did everything I could to make my Android device look like an iOS device. It wasn’t intentional; it was force of habit. I arranged the app icons in perfect little rows, and set up the dock so that it looked just like the dock that iOS gives you. The takeaway, I guess, is that if you’re worried about losing the look and feel of iOS at the most basic level, don’t! Android’s customizability means it can feel just like iOS. In fact, there are skins you can download to make it look exactly like iOS.

That much customizability took some getting used to; I found myself ignoring helpful Android features, like the back button, while reaching for spots on the screen where would have been buttons in iOS.

Finally, I got a launcher of my own. Although I tried a few different ones, I ended up spending the most time with Nova. I didn’t get too deep into the customizing the HTC One, though, which is why I opted not to upgrade to Nova Prime for $4. For me, the upgrades that Nova gave to the interface—namely the nice carousel effect when navigating through apps—made the phone more fun to use. I also liked the extra latitude with arranging icons and making folders. It really made Android feel more dynamic.

For a few weeks, everything was magical. The HTC One itself is a beautiful piece of hardware. Once I got more used to the Android software, I marveled at the device’s design. It was a huge improvement over the iPhone 5, which I admittedly do not like very much. And the big screen! I never knew I wanted so much screen until it was staring me in the face. While it did feel a little bulgy in my pocket, it was a pleasure to read on a surface of that size.

I warmed up to Android itself quite a bit, too. It’s just dripping with utility. The notification center, for one, was one of the places where I spent a lot of my time. While it wasn’t as glossy as Apple’s notification center, it was three times more useful. Especially useful was the control panel behind it that gave quick and easy access to settings like Wi-Fi networks and Bluetooth connections. Apple attempted its own version of this with the Control Center, and while it looks nice, it doesn’t work very well.

There are a whole host of individual features I liked better on the Android—the widgets, the launcher, and the gestures, to name a few. But more than that, even, I loved seeing some Google products in their native environment. For instance, voice control works remarkably well, so I found myself talking to my phone more. I also found myself using Google Now on a daily basis. Yes, it’s available through the Google app on iOS. But it’s worlds better on Android.

Any smartphone has features and drawbacks, though. While I enjoyed the flexibility and depth of what Android could do, there were just as many little things that frustrated me. Hooray for trade-offs.

Let me start with stability. Almost immediately, I noticed bugs in Android apps. Some of the them were only slightly annoying. Others bordered on absurdity. For example, one day I headed into the office and tried listening to a Spotify playlist. My Android-powered Spotify app had other designs. It would play the first 10 seconds or so of a song before skipping to a completely random song. That song would play for 10 seconds and then it would skip again. The buggy app rendered the service—which I pay for—completely unusable. Resetting the phone didn’t help, but somehow, everything was back to normal, a day later.

That’s just one example. And as I understand it, Spotify is notoriously buggy. Either way, I’d never had such an involuntary song-skipping bonanza on my iPhone. Other bugs weren’t so debilitating, but they were annoying. I lost many promising games of 2048, for instance, thanks to a bug that would suddenly turn my touchscreen into a schizophrenic mess. I’d swipe left, and the screen would think I’d swiped right. When you’re playing a gesture-based game, this is indeed very annoying.

That’s not to say that you won’t find the occasional hiccup in an iOS app. Of course you do. But anecdotally, I experienced more of them in my three months of Android than I did in as many years of iPhone.

The other major issue I struggled with was latency, but that obviously can vary from device to device. The Nova launcher is known for its responsiveness, but adding a layer over the operating system probably doesn’t help with speed. It’s a tiny complaint, but it really drove me crazy. When it takes a couple beats longer to do something you do very frequently, that time (and frustration) adds up. Benchmark tests have actually shown that the iPhone screen is twice as responsive as its Android competitors.

I’m also willing to concede that some of my problems weren’t really Android problems as much as they were simply smartphone problems that manifested themselves differently on the Google-built software than they did on the Apple-built software. Any phone will slow down if you put enough pressure on it, and bugs pop up in a lot of apps. That’s just how hardware and software work. As iCloud continues to teach us, the iPhone is hardly invincible. That’s the reason I decided to switch to Android to begin with!

My grievances with Android—not to mention my being simply accustomed to using an iPhone—added up over the course of the summer. By the time new iPhones came around, I couldn’t wait to switch back. Rumors told me that the iPhone 6 would be amazing, but in my head, just going back to iOS was like going home again.

In reality, it was more like going to a torture facility. That torture facility is called the Apple Store. Long short, it took three visits and probably six hours of wait time to get a functional phone. Some homecoming.

It’s been about a couple weeks now. My iPhone 5 feels tiny in my hand—I scrapped my original plan to upgrade to the iPhone 6; it’s nice and all that, but upgrading isn’t always a sensible option—and iOS feels surprisingly basic. It’s also not as familiar as I remember it. I find myself trying to do Android things on an iPhone now. It’s silly, really.

Oh, and that iCloud bug that prompted the switch to begin with? It came back when I recentlyupgraded to iOS 8.

To be perfectly honest, the whole experience of switching back and forth between Android and iPhone left me with a little bit of whiplash. I spent my whole summer struggling to use a new a new device, and now it looks like I’ll spend half the fall remembering how to use the old one. And you know what? The two smartphone experiences aren’t even that different.

If it’s a sensible option, I’d actually encourage everyone to try out their platform of choice’s competitor at least for a while. So long as you remember to turn off iMessage before you do it, switching from iPhone to Android is easy enough. Most of your data should transfer seamlessly. Almost everything that matters is in the cloud at this point, anyway, and will travel with you. The switch back was also easy, though I decided not to fumble with getting all of my data back onto my iPhone. Regardless, you might be surprised to find that the other operating systems suits your preferences better. And at the end of the day, I do think it comes down to personal preference.

For now, I’ll stick with my iPhone 5, albeit begrudgingly. When it makes sense to upgrade, I will, and I’ll do so based on what the market has to offer then. Until then, don’t count me as a soldier in the Android army just yet. But I’m most definitely an ally.

Be sure to check out more Fix My Touch Kelowna News by joining our Facebook page, and visiting our web site www.fixmytouchkelowna.com regularly.