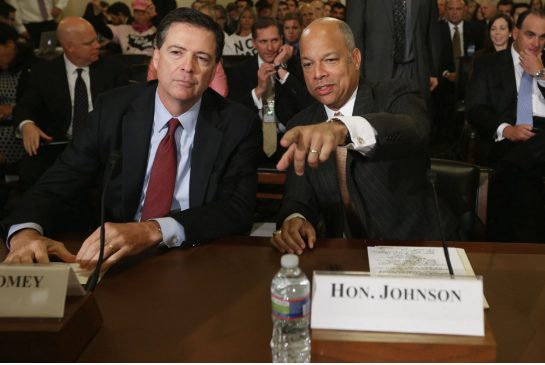 Washington (CNN) — Apple and Google have won praise from privacy proponents for efforts to encrypt their latest smartphones in a way that would prevent law enforcement from accessing certain private data. The FBI, not so much.

Federal Bureau of Investigation Director James Comey told reporters Thursday that the agency is talking to both companies to raise concerns that their privacy efforts could hinder criminal investigations.

Apple last week touted that with release of its latest operating system iOS8, it no longer could bypass the smartphone user passwords.

“So it’s not technically feasible for us to respond to government warrants for the extraction of this data from devices in their possession running iOS 8,” Apple said in a blog post.

Google quickly followed suit, saying it already had such technology in phones running its Android operating system, but that “as part of our next Android release, encryption will be enabled by default out of the box, so you won’t even have to think about turning it on.”

Comey said that he was “very concerned” that the companies were “marketing something expressly to allow people to place themselves above the law.”

Yahoo, which fought a losing court battle against some surveillance requests, recently won a fight to make public secret court documents detailing that battle. The company used the information to tout its efforts to protect the privacy of its customers.

The FBI director said he understood the privacy concerns in the wake of Snowden. But he noted that the FBI sometimes has an urgent need to access data, such as in cases of kidnappings or terrorism.

Comey said he supports the idea that the FBI should have a warrant from a judge to take a look into someone’s closet, or smartphone, but added he couldn’t support “the notion someone would market a closet that would never be open.”

WASHINGTON—The FBI director on Thursday criticized the decision by Apple and Google to encrypt smartphones data so it can be inaccessible to law enforcement, even with a court order.

James Comey told reporters at FBI headquarters that U.S. officials are in talks with the two companies, which he accused of marketing products that would let people put themselves beyond the law’s reach.

Comey cited child-kidnapping and terrorism cases as two examples of situations where quick access by authorities to information on cellphones can save lives. Comey did not cite specific past cases that would have been more difficult for the FBI to investigate under the new policies, which only involve physical access to a suspect’s or victim’s phone when the owner is unable or unwilling to unlock it for authorities.

“What concerns me about this is companies marketing something expressly to allow people to hold themselves beyond the law,” Comey said. At another point, he said he feared a moment when “when people with tears in their eyes look at me and say, ‘What do you mean you can’t?’”

Comey said he was gathering more information about the issue and would have more to say about it later.

An FBI spokesman Thursday was not able to immediately amplify Comey’s remarks.

Both Apple and Google announced last week that their new operating systems will be encrypted, or rendered in code, by default. Law enforcement officials could still intercept conversations but might not be able to access call data, contacts, photos and email stored on the phone. 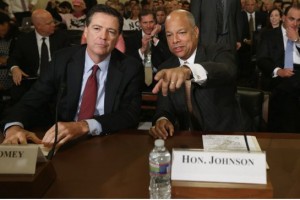