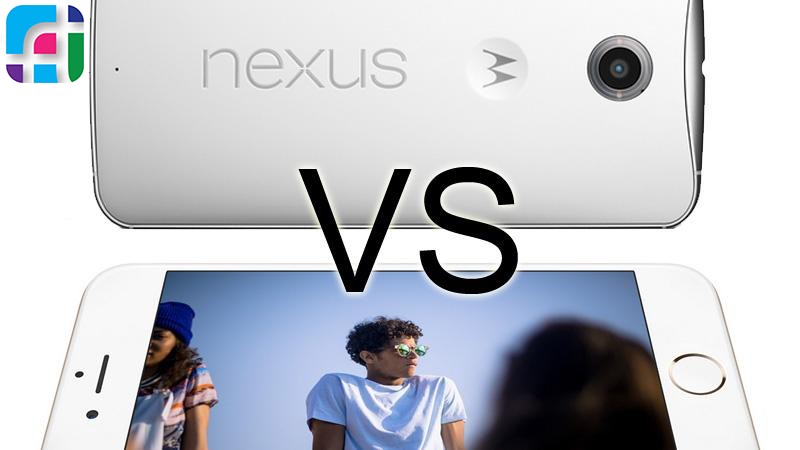 Google Nexus 6 vs iPhone 6 Plus comparison

Google sprang a surprise announcement on us on Wednesday 15 October, the day before Apple’s iPad event, unveiling the new Nexus 6 smartphone, the new Nexus 9 tablet, the Android 5.0 Lollipop mobile operating system and an Apple TV rival called the Nexus Player. Here though, we’re comparing Apple’s iPhone 6 Plus with the Google Nexus 6 smartphone to help you decide which is best for you.

We’ve not yet had a chance to try out the Nexus 6 for ourselves yet, so this article is based on the current information provided by Google and our full iPhone 6 Plus review to help you get an idea of what the new Google smartphone is like and whether it’s worth investigating further if you’re thinking of buying a new smartphone. We’ll update this article when we get our hands on a Nexus 6 with more detailed information including benchmark results, camera tests and battery life comparisons.

Google worked with Motorola to design and build the Nexus 6, so the new smartphone looks very similar to the Morotola Moto X. It has a “contoured aluminium frame,” but the back appears to be plastic, and comes in either ‘Midnight Blue’ or ‘Cloud White’.

The iPhone 6 Plus, on the other hand, has a completely aluminium back case for a more premium look. It’s available in silver, gold and slate grey colour options to suit your personal style.

You’ll be surprised at how much difference half an inch makes when it comes to screen size, so it’s worth holding both of these smartphones for yourself before purchasing either one to see whether you’re comfortable using the larger device.

Inside the Google Nexus 6 is a Qualcomm Snapdragon 805 processor clocked at 2.7GHz and coupled with Adreno 420 graphics, so expect this to be a rather powerful smartphone. It has 3GB of RAM, too, while the iPhone 6 Plus has 1GB.

The iPhone 6 Plus has already proven to be extremely powerful too, with its custom-built, 64-bit A8 processor and M8 motion co-processor that performed brilliantly in our tests, even during heavy-duty tasks.

As for storage, there are two capacity options for the Google Nexus 6: 32GB and 64GB. There’s no microSD slot which will disappoint some Google fans. The iPhone 6 Plus also lacks a microSD slot but does offer 16GB, 64GB and 128GB options.

Both the Nexus 6 and iPhone 6 Plus have 802.11ac WiFi, Bluetooth 4.1 and NFC connectivity options, in addition to 4G LTE.

One of the features of the Google Nexus 6 that we’d love to see on an iPhone soon is the dual front-facing speakers, so if you’re intending to watch movies or TV on that large screen and don’t want to be restricted to headphones then the Nexus 6 is well worth considering.

The Nexus 6 doesn’t have the fingerprint sensor that’s found on the iPhone 6 Plus, though, so you won’t get that added security and ease of use that we’ve found to be big time-saver.

We’ll be carrying out full camera tests of the Nexus 6 to show you examples of the images you can expect to capture with the smartphone compared with the iPhone 6 Plus.

Google has included a handy fast charging feature in the Nexus 6, which it claims will give you up to 6 hours of battery life after just 15 minutes of charging time. The battery itself is 3220mAh, which Google says offers more than 24 hours of use from a full charge, so we’re looking forward to testing these claims for ourselves when we get our hands on a review unit.

If Google’s claims do prove to be true then you can expect to get more battery life from the Nexus 6 than you would from the iPhone 6 Plus’s battery, though Apple has made some improvements with its A8 processor to help with efficiency and suggests that you can expect up to 24 hours of 3G talk time on one charge.

For us here at Macworld – who already use Apple’s iOS operating system as well as Macs – software is a huge factor to take into consideration when purchasing a new smartphone, so if you’re also an iOS and/or Mac user then this could be the case for you too. If you buy the iPhone 6 Plus, you’ll get iOS 8, which means you can quickly and easily transfer all of your apps, games, music and other content onto your new smartphone without needing to buy apps again or start games from scratch, for example.

Plus, with OS X Yosemite imminent, Mac users will also get Continuity features that will make life much easier for iOS 8 users, including the ability to AirDrop between an iOS device and your Mac.

All that and the fact that we simply love iOS 8’s design, features and simplicity mean we’re more likely to choose another iOS device, but if you’ve never owned an iOS device, if you don’t use a Mac or if you’re not keen on iOS 8 at all then you’ll be interested to hear that the Nexus 6 runs Android 5.0 Lollipop, the new version of Google’s operating system.

You can find out how iOS 8 and Android Lollipop compare here, but new features include better multi-tasking, interactive notifications and a new design (though these features do all seem rather familiar to us…).

While we haven’t received official confirmation about a UK price for the Nexus 6 yet, it’s thought that it costs $650 in the US, which is a surprise as it’s much higher than the price tag of its predecessor, the Nexus 5, which was $350.

That also means it’s much closer in price to the price of the iPhone 6 Plus, which starts at £619 or $749, so is still more expensive but they’re now both positioned as high-end smartphones.

We’ll update this article with UK pricing when it’s confirmed. Pre-orders of the Nexus 6 are expected to start on 29 October ahead of a November release.

The Google Nexus 6 is a beast of a smartphone, with a huge 6in screen, so if you thought the iPhone 6 Plus was too big then you can walk away now.

If you’re an iOS lover looking for a big-screened smartphone, the iPhone 6 Plus is a no-brainer, though we’d seriously consider whether the 4.7in iPhone 6 is big enough for your needs, but for Android phablet fans we’ve no doubt that the Nexus 6 will appeal. We’re surprised that Google has decided to launch just one new smartphone, as we don’t think the 6in screen will suit all of its customers and would have preferred to have a smaller option like the iPhone 6 offered by Apple.

Read this article at it’s source at MacWorld