Apple’s flagship Smartphones are on a successful track; everyone is keen to know when Apple will be releasing its iPad Air 2. According to latest reports the Apple iPad Air 2 launching event is expected on October 16th at Apple’s Town Hall. Report further suggests that this event won’t be large like Apple held a few weeks ago on Sep 9th for launching of its flagship iPhone 6 and iPhone 6 plus and last but not the least Apple watch. 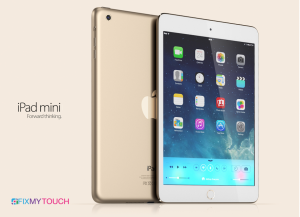 At the aforementioned event Apple is expected will be announcing iPad Air and iPad Mini successor. As far as specs are concerned, the device is expected with Touch ID feature which Apple will be using for the first time for its Tab line up. A new gold color variant of iPad Mini will be available. The A8 processor chipset will be powering the Apple iPad Air 2.

As per latest leaks, Apple is currently working on a 12.9 inch iPad Pro which will be released in first quarter of 2015. Apple’s upcoming iPad Air 2 will not be featuring Apple Pay because they won’t be featuring NFC connectivity.