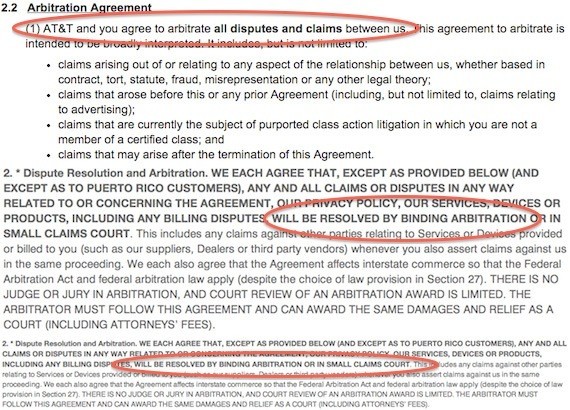 What Cell Companies Don’t Tell You

Signing away your right to have rights!

When you sign a cell phone contract, you’re not just agreeing to pay thousands of dollars over a few years to AT&T or Verizon, or whomever. You’re also signing away your right to sue the company or participate in a class action lawsuit against it. What?; yes, as highlighted here.

If the cell phone provider systematically overcharges you or doesn’t deliver, say, on its promise of “unlimited data,” your only remedy — unless the government steps in — is forced arbitration, a private negotiation between the company and the customer where a non-judicial party decides your fate. Typically, the process is stacked in favor of the giant corporation.

Forced arbitration clauses have become widespread in recent years and there’s one
buried in AT&T’s terms of service. It’s why the Federal Trade Commission, not customers, just sued AT&T for allegedly slowing down Internet speeds on customers’ smartphones — even though customers were complaining about the practice for years.

The policies are aimed primarily at restricting customers from class action lawsuits, but they also forbid customers from taking cell phone providers to just about any kind of court — except small claims court, familiar to most Americans as the setting for The People’s Court; hardly the venue for exacting justice against multibillion dollar corporations.

Buried in these contracts from AT&T, Verizon and T-Mobile are clauses that take away your right to sue

T-Mobile is unique in having a forced arbitration opt-out policy, but it must be completed within 30 days of activation to be valid. So before you applaud the company for such a progressive policy, consider the likelihood that someone who just bought a new phone would also have the forethought to consider the best potential legal strategy against the company they bought the phone from. If a customer really envisioned becoming entangled in a legal dispute with a company over a purchase, they wouldn’t probably simply avoid doing business with that company.

Telecom companies are hardly outliers. Banks, retail stores and electronics giants have all found ways to get customers to sign away their right to take a company to court.

Even Cheerios tried to jump on the bandwagon. In April, the General Mills’ cereal brand changed its terms of service so that simply liking the cereal on Facebook voided a consumer’s right to sue. But after a New York Times story drew attention to the policy, the company quickly reversed itself. 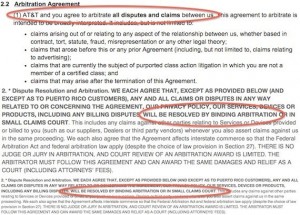 In 2011, the practice was upheld by the Supreme Court by a 5-4 vote in AT&T vs. Concepcion. The court also upheld the legality of class arbitration waivers. That means that not only can terms of service waive your right to participate in a class action lawsuit, but also your ability to enter arbitration with other consumers. Individual arbitration is the only option.

Some customers have tried to find justice against cell providers in small claims court, including one California man who sued and won $850 from AT&T in 2012. The stakes are low, but the companies’ monetary and legal advantage is narrowed. Here’s how Consumerist described the scene: “Since lawyers are not allowed in California small claims courts, AT&T was represented by its area sales manager.”

If you’re looking for a venue outside small claims court to shame companies into changing their policies, a petition may not be your best bet. Change.org has a forced arbitration clause in its terms of service.