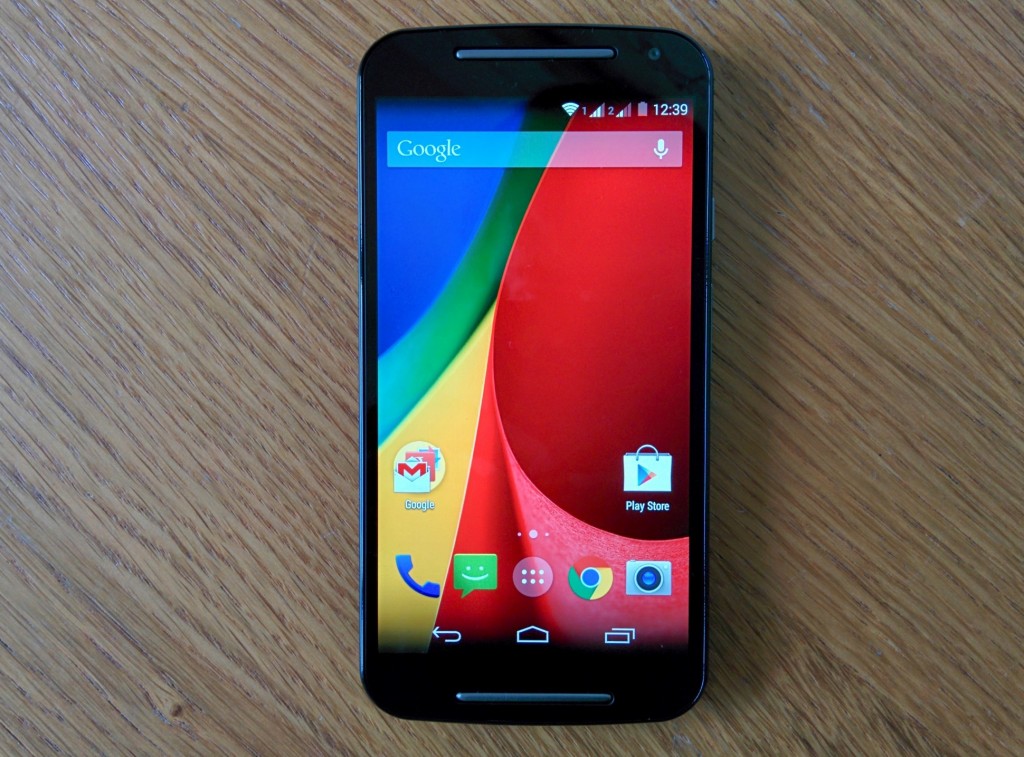 Motorola scored big with original Moto G but in fairness the company was shooting into an empty net. As recently as 2013, budget Android smartphones were almost universally terrible. Now as Motorola returns with its new Moto G in late 2014 the competition is hotting up.

Amusingly perhaps the biggest rival comes from Motorola itself. At $180 contract free the first Moto G was a steal, but the superb Moto E that followed was almost as good for $50 less. And now Google is giving away the magic recipe. The Android One initiative dictates specifications, supplies stock Android, promises fast delivery of updates and results in slick handsets for under $100.

Consequently the 2014 Moto G faces a whole new challenge. With a bigger screen, better camera and expandable storage as the headline features, can it win fans all over again? 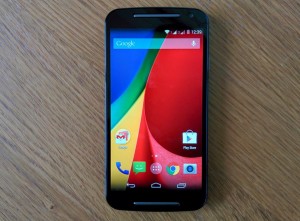 From a superficial perspective the new Moto G makes a great start. Design and build quality separated the original handset from the pack and Motorola hasn’t stood still. The 2014 Moto G still looks like its predecessor – hard black plastics and rock solid build quality (not it doesn’t bend) – but it also now shares more in common with Motorola’s top of the line 2014 Moto X. 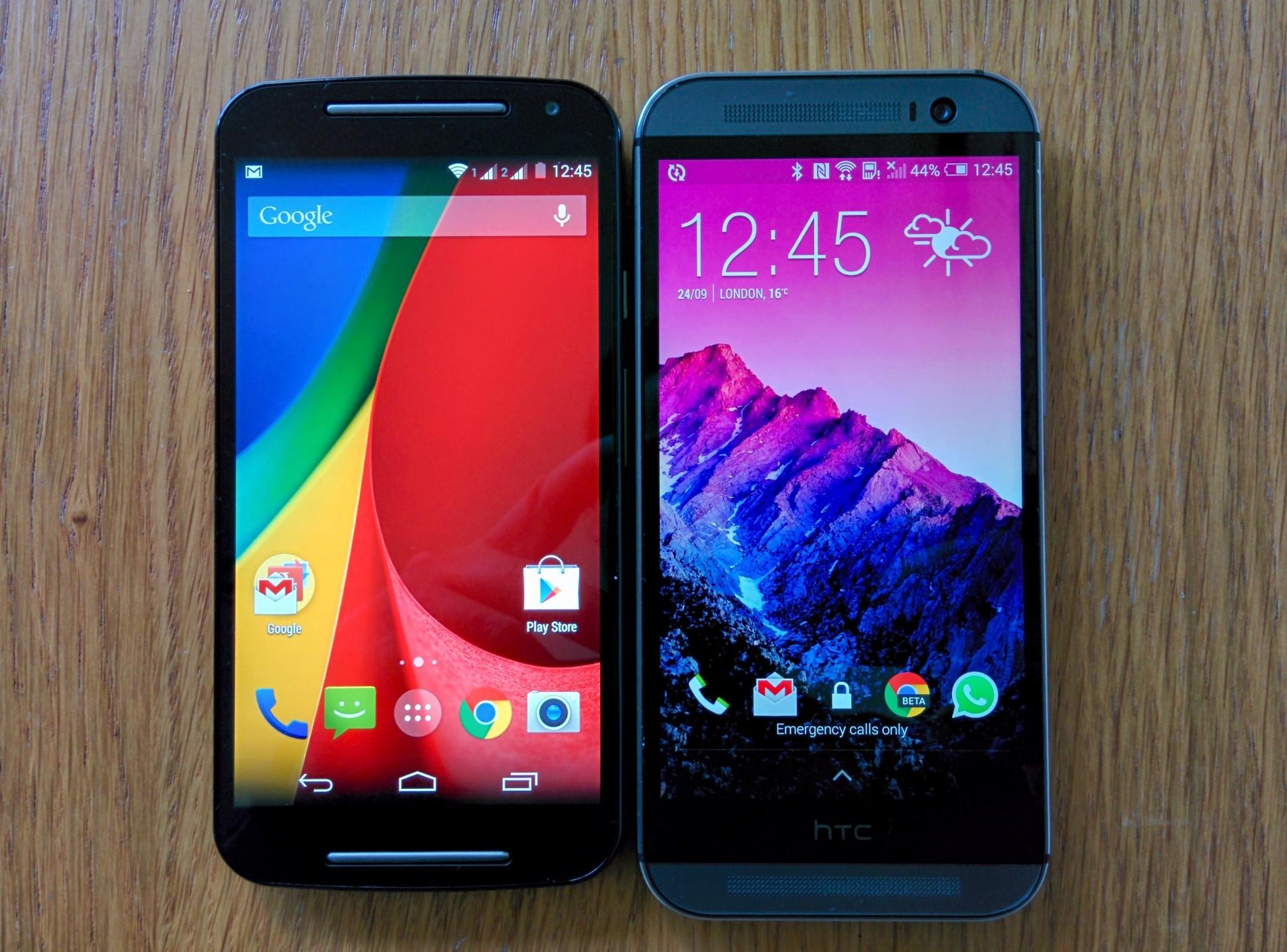 The obvious reference point is a larger 5-inch screen (more later), but in conjunction with it the second generation Moto G has slimmer bezels, the same palm-friendly curvature to its back and feels beautifully weighted. Compared to its predecessor, the Moto G is substantially larger at 141.5 x 70.7 x 6-11mm (width varies due to the curve) versus 130 x 66 x 6-11.5mm but at 149g it is only 6g heavier.

Consequently the new Moto G still feels great in hand and, unlike many rivals (notably HTC/Apple), Motorola phones have a gently textured rear which means it is easy to maintain a good grip. This is criminally underrated given the finger acrobatics essential to using big screen phones. 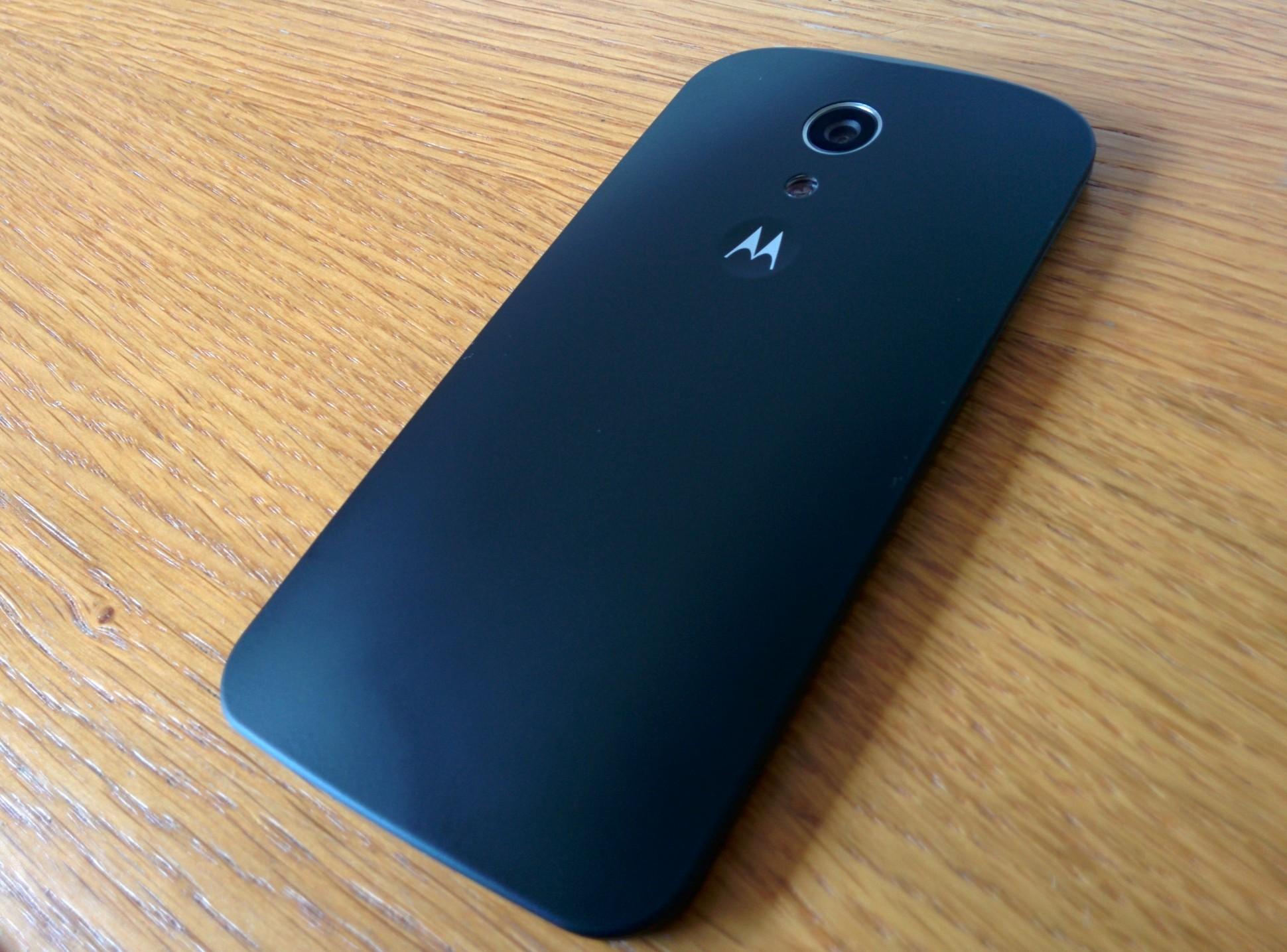 Of course why the 2014 Moto G is larger is because of the screen jump from 4.5 to 5-inches. Given the new handset keeps the same 1280 x 720p resolution I was concerned how it would look, but I should not have feared: the colours are rich, the IPS panel is bright and it retains the Corning Gorilla glass not usually seen in budget phones.

Yes the drop in pixel density (329ppi to 294ppi) does mean you can make out individual pixels if you look hard enough, but to put it in context Apple defines a Retina Display as 326ppi so it still leaves the vast majority of affordable phones (often 640 x 480 or 800 x 600 pixels) in the dust. 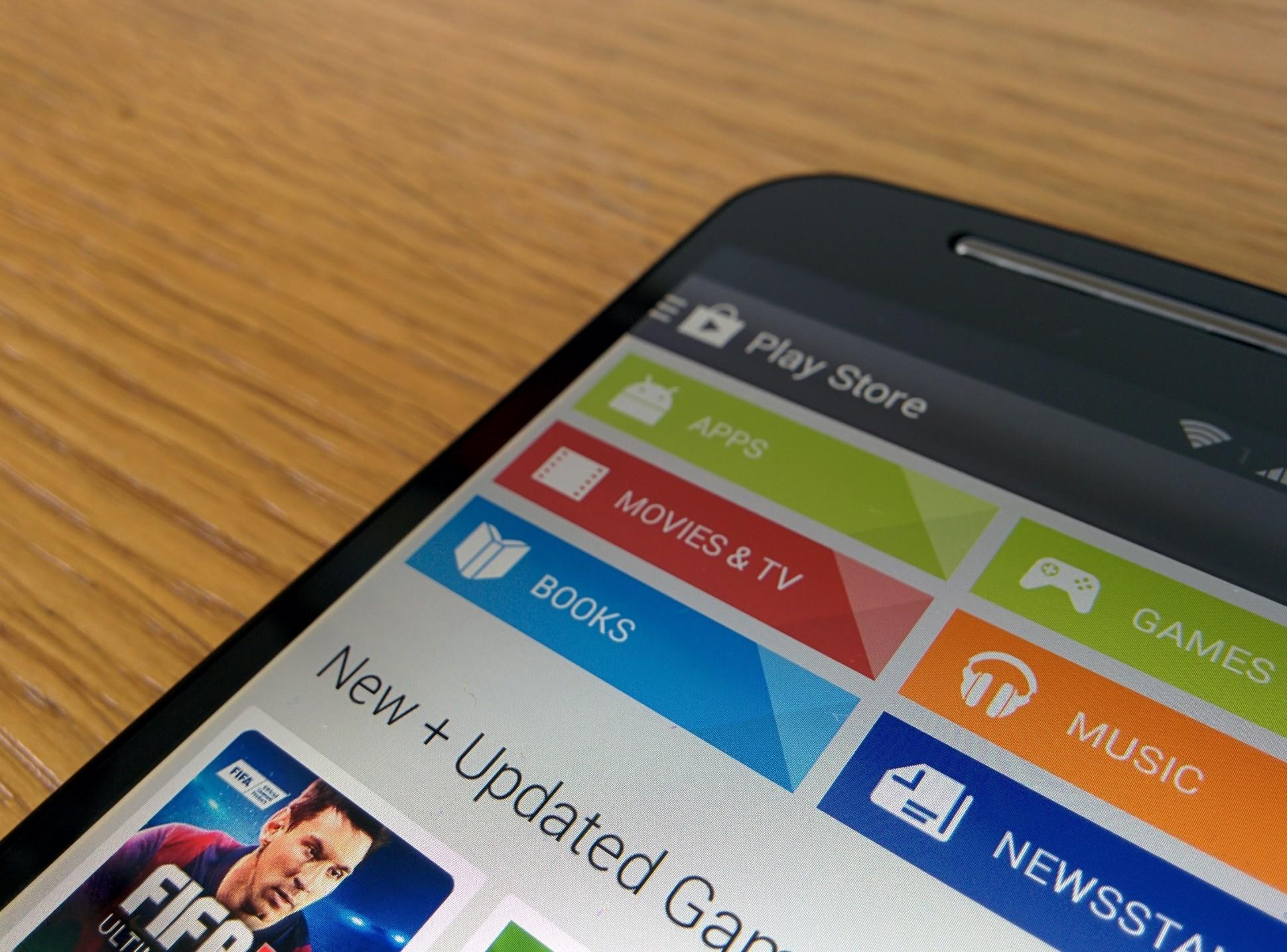 The other big jump is the camera. This is important since the 5 megapixel f2.4 shooter inside the original Moto G was its major weak spot and the move to an 8MP f2.0 model again takes the new phone beyond most handsets in this price bracket. The front facing camera gets improved too moving from 1.2MP to 2MP. I’ll talk about their picture quality in the dedicated camera section further down.

The final headline improvement is the aforementioned expandable storage. Like the 2013 Moto G, the new model is still available in 8GB and 16GB versions, but it also offers a microSD slot which takes cards of up to 32GB. It is a shame Motorola doesn’t officially support 64GB, but I doubt many will struggle with a potential 48GB of storage given stock Android’s small install footprint. 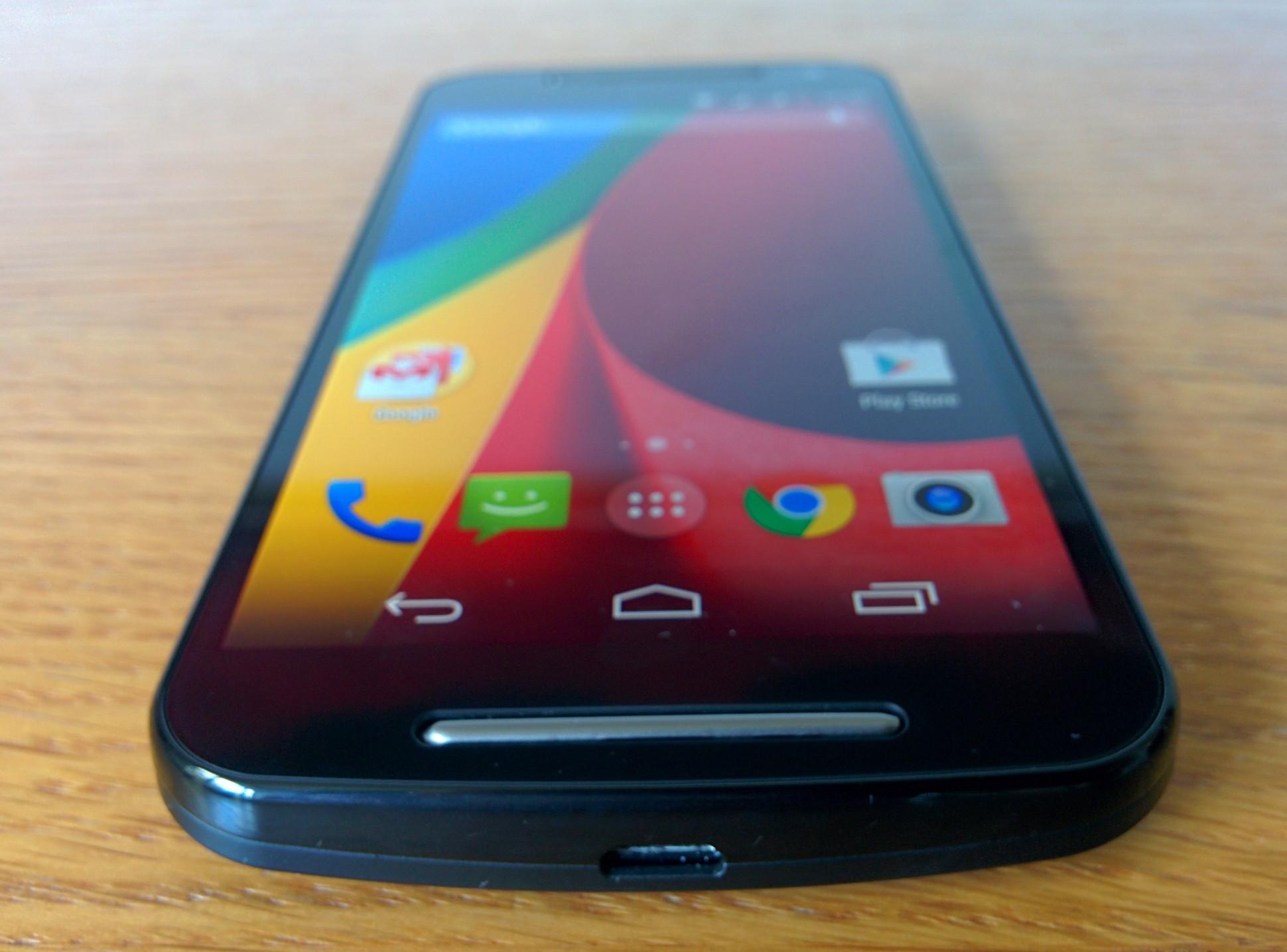 There is a further improvement Motorola has kept quiet: the single, mono rear-ported external speaker is now front-ported and dual stereo. This makes a big difference and the Moto G is louder and clearer than many premium handsets (looking at you Nexus 5). I still wouldn’t choose to listen to music with it, but it is great for podcasts and talk radio.

Elsewhere much stays the same. This means good and bad news. The good news is the dual sim option remains, you get the latest version of Android (4.4 KitKat) with a guaranteed upgrade to Android L when it launches, and Motorola has kept Android virtually stock apart from some neat apps.

This isn’t the bloatware associated with Samsung, but genuinely useful things like ‘Motorola Migrate’ which brings your data across from another phone and ‘Motorola Assist’ which can automatically silence the phone when it detects you’re in a meeting scheduled in your calendar.

The bad news on paper is that Motorola hasn’t improved the Moto G’s performance. Inside still resides a now-ageing Qualcomm Snapdragon 400 chip with quad core 1.2GHz processors and an Adreno 305 GPU running at 450MHz. Ominously there is also the same 2070mAh capacity battery, despite the significant step up in screen size.

I’ll admit it. In keeping the same chipset I had prejudged the 2014 Moto G, but I was pleasantly surprised to find I was completely wrong.

Somehow the new Moto G still flies. It can stutter with the latest 3D games, but core navigation and web browsing is fast and smooth and apps load incredibly quickly. It may not match the Nexus 5 but for the basics I’d bet it comes close to the responsiveness seen in most premium phones which use custom Android skins.

How? I suspect the fact the new Moto G doesn’t actually have to drive any more screen pixels than its predecessor is a big factor, but if anything were to convince sceptics that pure Android is an infinitely better experience than handsets running third party skins, this is it. 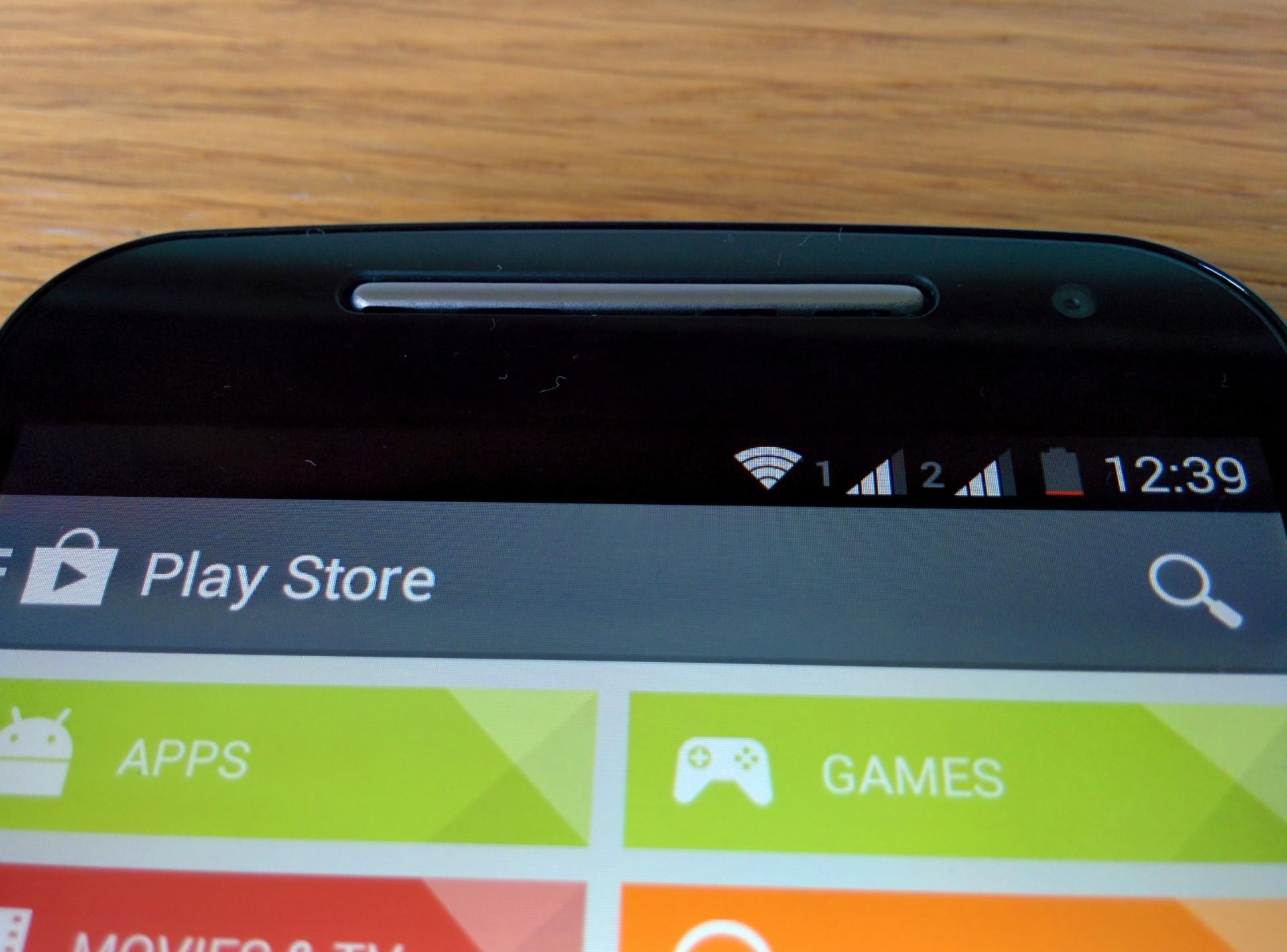 It takes a long time to run down the Moto G battery (image credit: Gordon Kelly)

Of course there is a flip side to slick performance. The phone may still be driving the same number of pixels, but they are bigger due to the increased screen size and this means greater battery drain. At least using logic.

Well logic disappeared here as well because, despite packing the same battery as the 2013 Moto G, the new model lasts even longer. This is remarkable because the original Moto G was famed for its good battery life, but I found with light usage I could get 3-4 DAYS use out of the new version between charges. 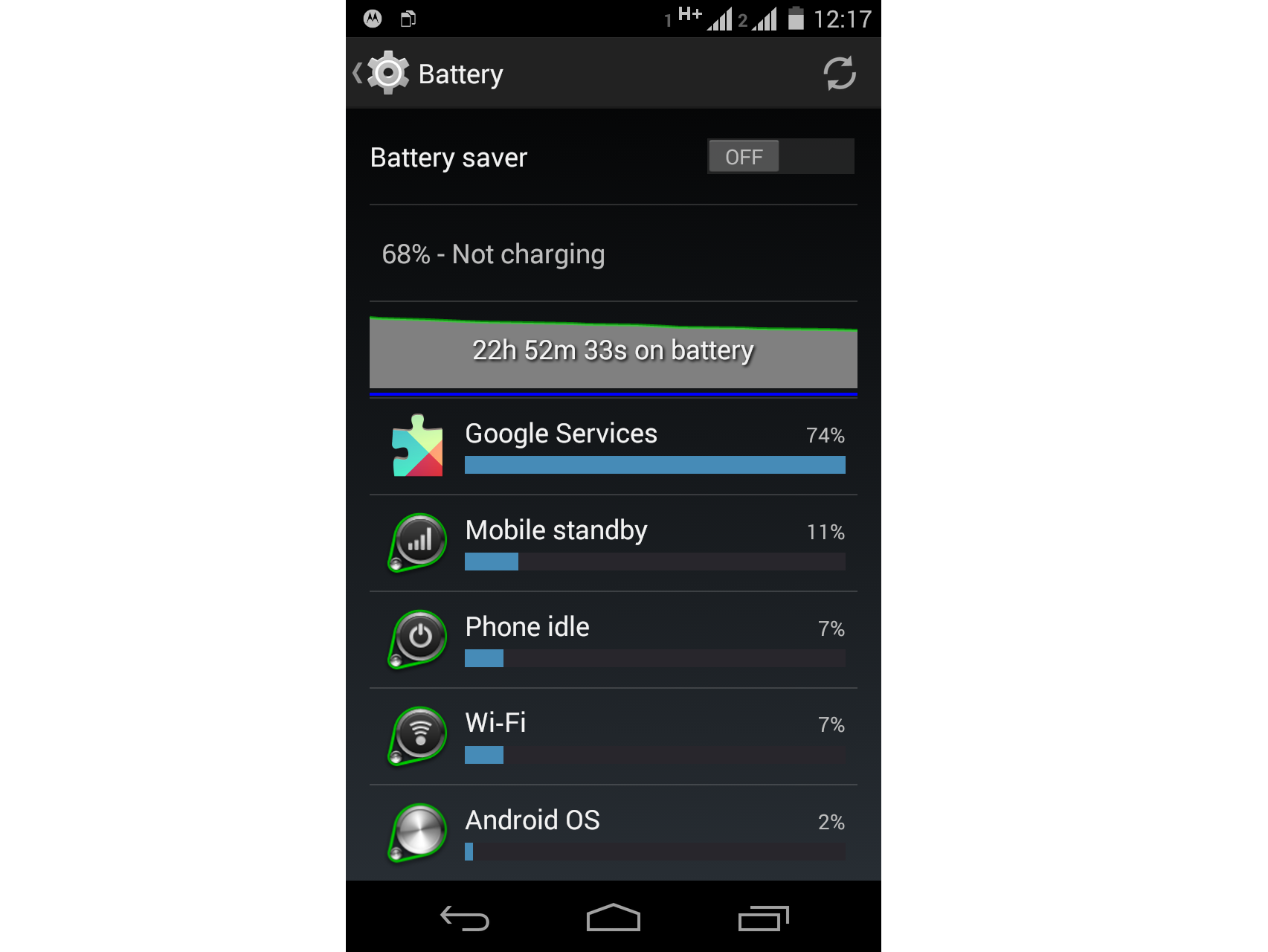 Light use and the Moto G can last 3-4 days (image credit: Gordon Kelly)

This is a number I’d never dream of attaining with the latest premium phones – or even many tablets. How is it possible? The first thing is Android 4.4 KitKat, which made a big deal out of making Android more battery efficient, and the second is Motorola has added its own efficiency algorithms and battery saving modes as it battery life gets low.

Yes you can run down the new Moto G in a day with intensive use, but I can’t realistically see anyone needing to reach for a charger from early morning to late night. With Android L promising further significant battery saving improvements courtesy of ‘Project Volta’ the Moto G is also only likely to get better. Rightly this will be a deal maker for many. 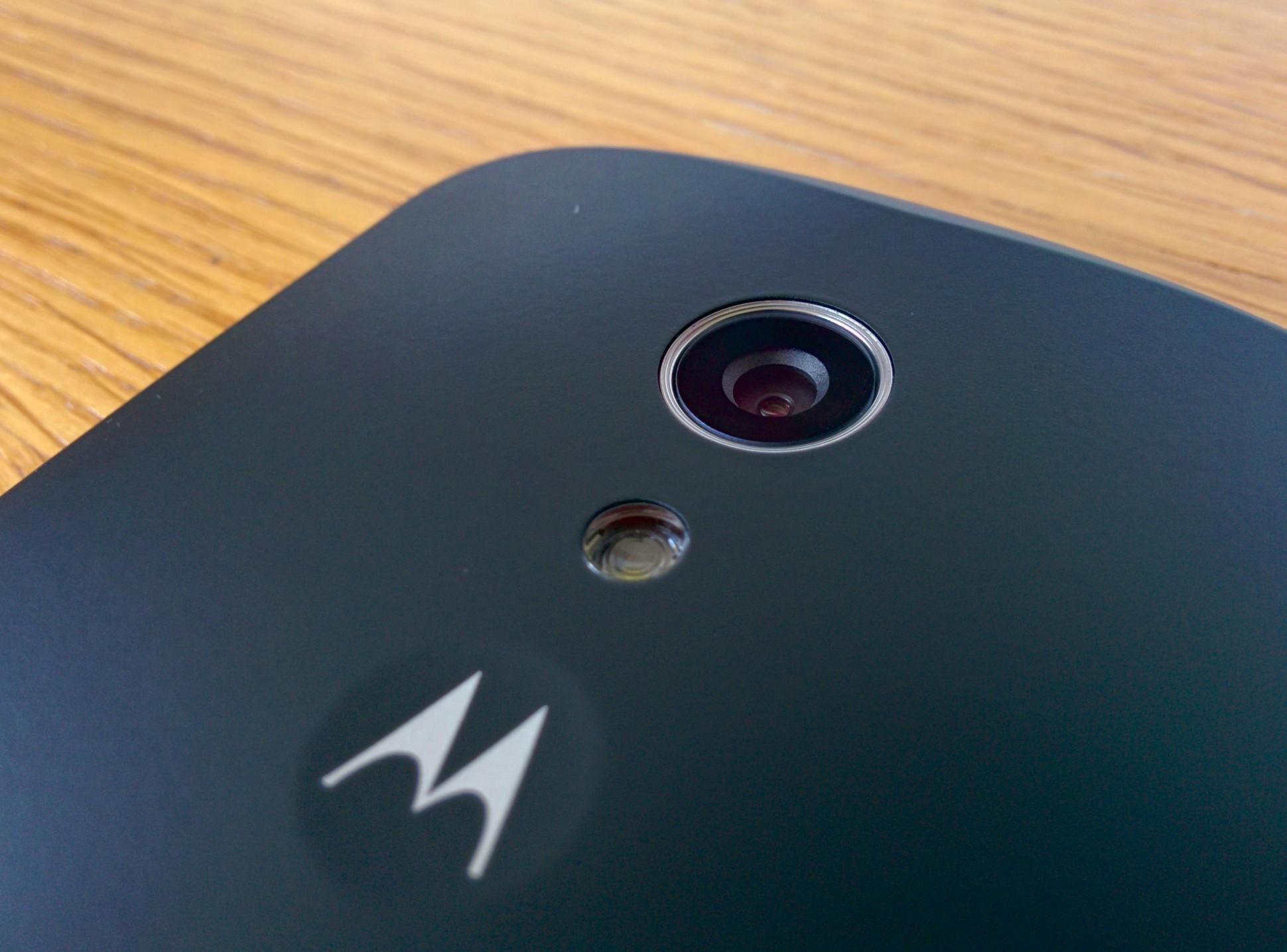 Camera – Not Perfect, But A Big Improvement

Which brings us to the Achilles Heel of the original Moto G. No-one really expects a great camera on a budget smartphone and that’s exactly what the 2013 Moto G delivered: not a great camera.

Is this another area where the new Moto G is a revelation? Maybe not a revelation, but it does offer significant improvement. The key change is not so much the leap from 5-8 megapixels, but the improved sensor which moves from f2.4 to f2.0. 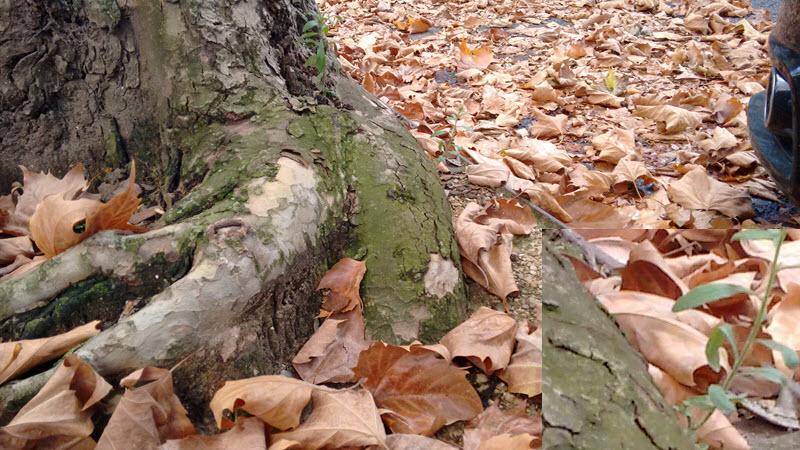 The result is shots which are excellent in good light. You will see in the example above that the camera does a very good job of picking out the texture of both the tree bark and fallen leaves, though the full size crop still reveals that detail is being lost.

The camera struggles more when multiple light sources get involved. Motorola does offer an HDR shooting mode but as you’ll see from the shot below it struggles to pick out the clouds in the sky. Then again I would argue this still sets a new benchmark for budget smartphone cameras. 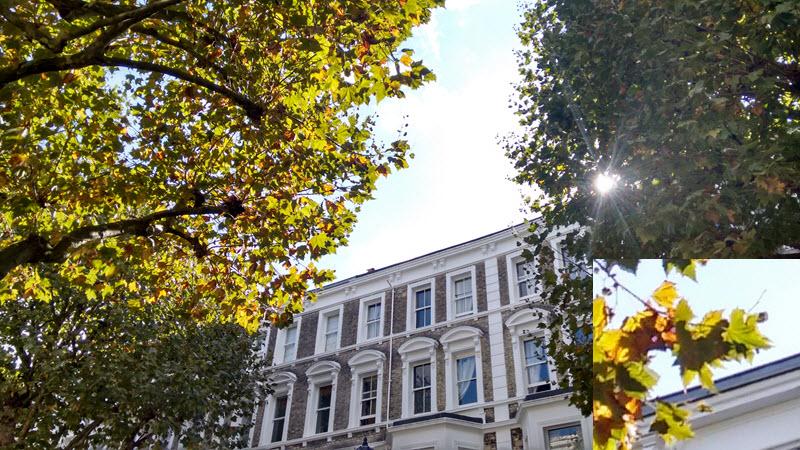 One grumble: Motorola’s default camera app takes a picture when you touch anywhere in the viewfinder. This is a handy shortcut, but I’d rather have the option to touch-to-focus like most apps as the camera sometimes picks the wrong focal point. If this matters to you I’d suggest installing the default Android camera app, which Google has made available in the Play Store. Here’sa link.

So up until now it has been all sunshine and roses, but there is one aspect which may put potential buyers off: the absence of 4G.

I can see the reasoning: cut costs and save battery life, but given an incremental update to the 2013 Moto G (aptly named the ‘Moto G 4G’) fixed that it seems a backwards step to drop it from the new model.

I suspect why is Motorola plans to sell a lot of Moto Gs in countries where a full 4G roll-out is not complete and then offer a 4G option in future just as it did with the 2013 Moto G. Consequently if 4G is a deal breaker for you I’d sit tight because I’m very confident a 4G version will arrive within 3-6 months as before. 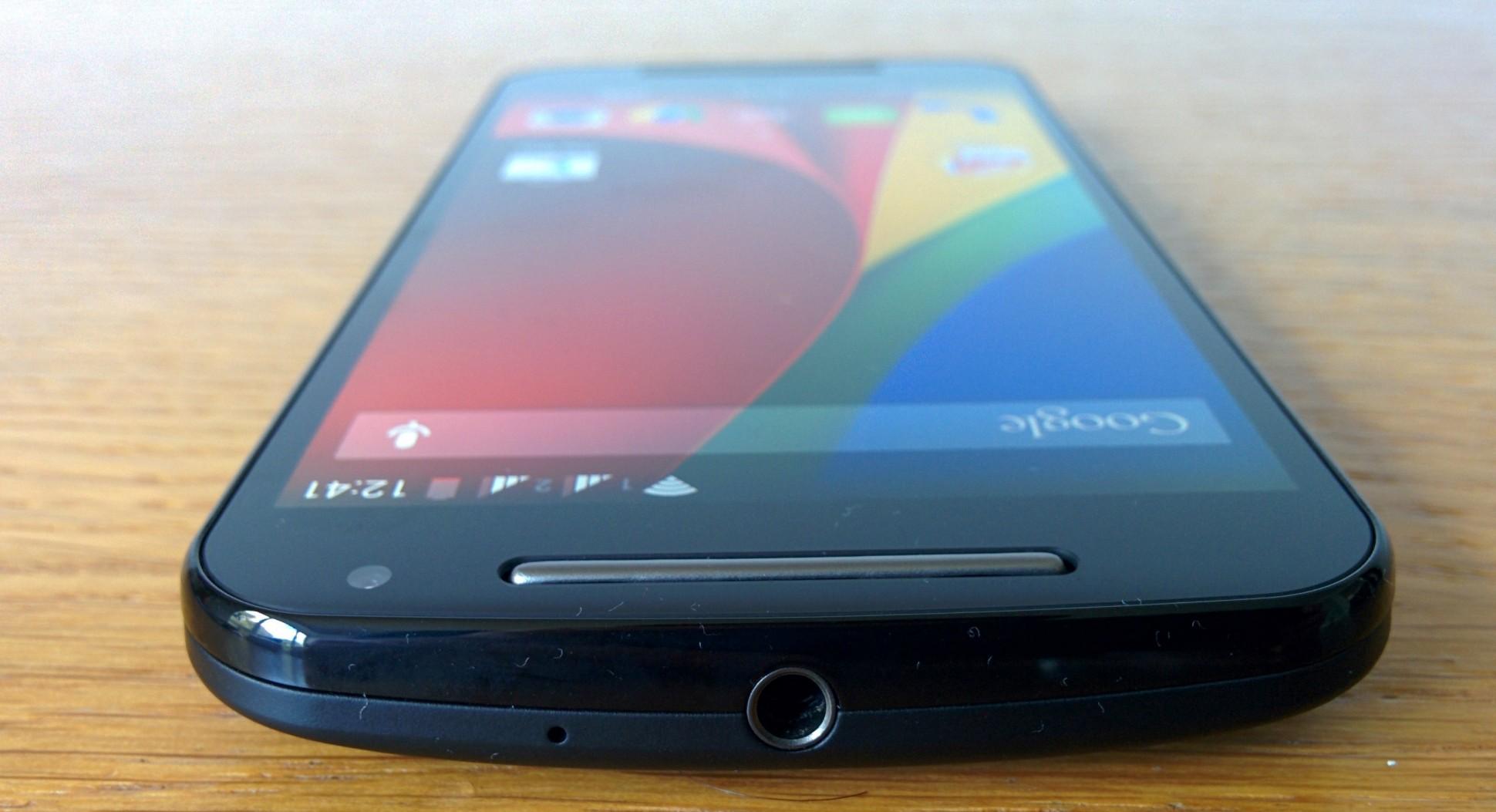 Prices vary from country to country and, while it is available on contract (nearly always free), there is a push to sell the handset unlocked and contract free. In the US this means starting from a highly tempting $179.99 while the UK you will get it for £149.99 including tax (single sim version).

Both prices do represent a slight increase compared to the original Moto G, but I’d argue it is a price well worth paying.

In all honesty I didn’t expect to like the Moto G as much as I did. The issue was Motorola sticking to the same chipset and battery, but I need not have worried. The Moto G still flies thanks to stock Android and the battery life is superb, outlasting any flagship phone I’ve used in 2014 due to efficiencies in 4.4 KitKat and smart Motorola battery saving modes.

With these concerns quelled, the improvements come to the forefront. Motorola has upgraded the Moto G’s biggest selling points – the display, camera, external speaker and storage – while still keeping the price down. The promise of Android One promises another imminent revolution in cheap, high quality smartphones and the Nokia Lumia 630 shows Windows Phone can offer great value but for now the Moto G is once more the budget handset to beat.