Samsung has unveiled the Galaxy Alpha, its first smartphone with a metal frame offering a “luxury look and feel.”

Samsung’s Galaxy smartphones have traditionally been made of plastic, prompting criticism that they look and feel cheap compared with competitors in the higher-end smartphone market, such as the HTC One(which, like the Samsung Galaxy series, runs the Android operating system) and the iPhone, which has traditionally had a metal back, but comes in cheaper, plastic versions. 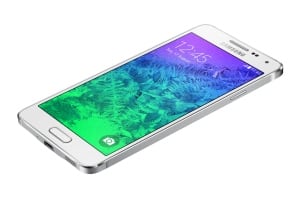 Samsung said the Galaxy Alpha will be the ‘slimmest and sleekest’ Samsung smartphone to date. (Samsung)

Samsung said the new phone will be the “slimmest and sleekest” Samsung smartphone to date, at seven millimetres thick.

The Galaxy Alpha has a 4.7-inch screen, smaller than both theGalaxy S5, which has a 5.1-inch screen, and the Galaxy S4, which has a 5-inch screen. The phone also has an “advanced” camera with HDR (high-dynamic range) imaging, which allows it to take photos in difficult lighting, and an “ultra power savings mode” to make the battery charge last longer.

The new phone will be available at the beginning of September in five colours: charcoal black, dazzling white, frosted gold, sleek silver, and scuba blue, the company said in a news release.

On mobile and can’t see the video? Watch here. 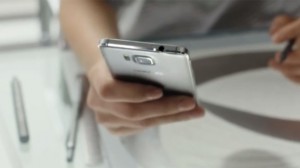