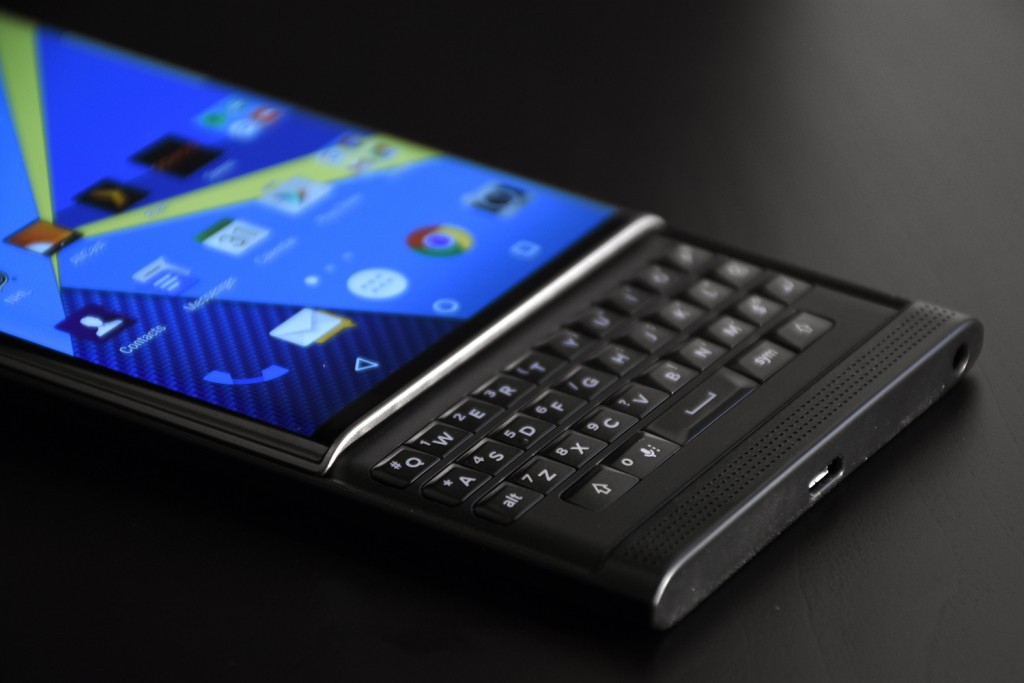 The Return of the BlackBerry – the Priv Strikes Back

7…8…9…Everyone waits to hear the bell declaring a knockout…But no, BlackBerry stands up! BlackBerry, once the darling, the heavy hitter, the…(well, you get the idea)…of the smartphone world has been firmly supplanted by the two heavy-weight contenders now constantly battling for the top spot – Apple and Android. But, like Rocky said, ‘it ain’t over till it’s over’. The Priv, the latest move in BlackBerry’s fighting style, won’t change the fact that BlackBerry is down, but it’s a sure indication that it’s not yet out either. (OK, that’s the last of the boxing analogies, I promise.) The Priv is aimed at bringing the BlackBerry brand back into the limelight. But is it worth the show?

BlackBerry wouldn’t be BlackBerry without a keyboard, and it’s probably the first thing that stands out to you about the BlackBerry Priv. The screen slides up to reveal the four plastic rows. The keyboard is laid out in classic, wistfully nostalgic style and registers even the fastest tappy taps without fail. Software upgrades have been installed to optimise the use of the keyboard. From the home screen, you can quick-launch shortcuts or just start typing to start a search. The keyboard isn’t faster than a touchscreen; it’s more about the feel and personal preference.

The hardware is a comfortable 5.4-inch curved AMOLED display. The 2560 x 1440 high resolution display looks crystal clear, the front-facing speaker works well, and the battery is decent-sized at 3,410 mAh. The processor is a Snapdragon 808 coupled with 3GB of RAM and 32GB of storage, which you can expand with an SD card if you wish.

The Priv is a complete Android device, fully featured and fun to use. And, as the name suggests, the Priv has a steel-coated veneer of security to keep your information safe. It uses something called DTEK security, which monitors your phone for malicious acts and provides you with useful security audits.

Also, (and we’re completely neutral here), but let’s not forget that BlackBerry is a proud Canadian company. So if you’re on the fence about whether to switch from Apple or Google, perhaps the patriotic consideration will help sway your decision.

The Snapdragon 808 processor needs to be a bit snappier; software upgrades, which BlackBerry is already providing, may help improve performance. The $699 price tag isn’t for the faint of heart or the short on cash. The battery life says up to maximum of ‘22.5 hours of mixed use’, but it’s nowhere near that if you’re running videos or games. And although the 18-megapixel sensor with Optical Image Stabilization and a dual-LED flash is the best camera ever put in a BlackBerry and the resolution looks great, there are better cameras on other smartphones with faster processing times. The BlackBerry Hub, kind of a like a master app HQ that allows you to handle and filter your calls, emails, texts, tweets, etc. works well but needs to be able to think and act faster. We live in a ‘now’ world; even a 1-3 second wait can seem like a long time these days.

The Priv is a solid effort with many accomplishments, but a few drawbacks too. On the plus, the Priv delivers strong performance in a solid package, with a cool retro compact keyboard that is easy to operate. The design is sleek and sharp, and the Android updates are a useful (and, in our opinion, overdue) upgrade. On the minus, the phone does feel a bit top heavy when it’s fully extended and the keyboard is too small for those of us with larger digits. The camera certainly isn’t the best on the market, and though the Priv is very security-centric we’re left wondering why it doesn’t include a fingerprint reader.

The highly functional keyboard and Android additions make the Priv the best BlackBerry has offered in a long time, but if you don’t like keyboards there are cheaper phones with more features on the market. Updates to apps and the operating system improved some of the performance glitches and bugs, but more upgrades and better integration is needed. Time will tell if BlackBerry is back in the ring, or whether it’s too little too late. (One last boxing analogy to see you out.)

For all the latest and greatest in tech news check out Fix My Touch’s blog; you’ll find our topics well worth a read. We are the most reliably referred business for cell phone repairs and touchscreen device customisation in the entire Okanagan Valley, and our repair warranties are second to none. Drop by one of our stores or contact us today.