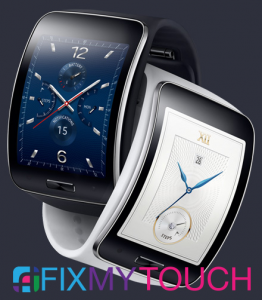 If you are itching to try out a smartwatch, but weren’t convinced it’ll be of any use chained to your smartphone, then you just might find what you’re looking for with the Samsung Gear S. This is the first Wi-Fi/3G-enabled smartwatch from a major brand, and it’s coming to AT&T, Verizon, T-Mobile, and Sprint in the beginning of November.

The Gear S has a pretty large (for a smartwatch), 2-inch curved Super AMOLED screen with a resolution of 360×480 (exactly 300 pixels per inch) and is powered by an unnamed dual-core processor, clocked at 1GHz, along with 512MB of RAM (which is pretty standard for smartwatches at this point).
The IP67-certified, dust- and water-proof device measures in at 1.57 x 2.28 x .49 in (39.9 x 58.1 x 12.5 mm) and both the Blue Black and White models weigh 2.32 oz (66 g). As already mentioned, the device also has dedicated Wi-Fi 802.11 b/g/n radio, but also Bluetooth 4.1 Low Energy and A-GPS with GLONASS support. Embedded within the body are also a whole bunch of sensors, including an accelerometer, gyroscope, compass, barometer, along with monitors for UV light and heart rate. With so much hardware packed inside, Samsung didn’t have a lot of space leftover to fit in a large battery, so we’re looking at a 300 mAh unit, which probably will require charging every night — at least based on our experience with smartwatches so far.
There’s one last caveat with the Gear S — it’s not making use of Google’s new Android Wear platform, and is instead relying on a version of Tizen built for wearables. This might be a letdown for some, as Android Wear appears to be moving in the right direction (and is certainly getting more and more third-party devs on board) and Google Now is quite a bit more powerful than Samsung’s S Voice platform, thought that might have been the price to be paid in order to give you a totally smartphone-independent smartwatch.
The Gear S will first launch on AT&T and Sprint on November 7 ($199 w/ 2-year contract or $16/mo. for 24 months, respectively) and, two days later, on T-Mobile ($14.58/mo. for 24 months). Verizon is confirmed to also get the gadget, but is keeping mum for now.
Canadian providers don’t yet have release dates, but as with everything else, it’s expected to be a few weeks or moths to follow; hopefully for Christmas.