While some people are vaguely aware that movement can be converted into electrical energy — think wrist watches or emergency crank flashlights — a new Kickstarter project has created a small, wearable battery pack that can harness the kinetic motion of common humans and release it back into smartphones, smartwatches and other USB-powered electronic gadgets.

Called “Ampy,” the device is small enough to slip into your pocket or strap to your arm. If you walk about 10,000 steps, cycle for one hour, or run for 30 minutes, you can generate about three hours of smartphone life, according to the Ampy team.

Of course, the placement of Ampy on your body and the intensity of action can factor into the amount of energy produced, so results per person, per activity will vary. 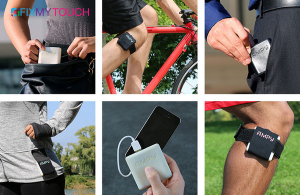 In the project video, an Ampy unit is shown moving up and down while strapped to a desk worker’s restless lower leg. I do this occasionally, but I’ve known some office workers who could burn enough calories moving their legs while sitting to make up for eating buttered popcorn that night.

For most people in industrialized countries, the convenience factor of Ampy — frankly — can’t be that great: Most people, most of the time, are near electrical outlets on reliable energy grids. For these people, Ampy is more about motivation than convenience. The premise is that if you’re aware of your motion and can associate exercise or movement with a positive benefit, you might be more likely to bike to work or go for a run.

The (optional) Ampy smartphone app tells you the amount of energy you’ve generated, the number of calories you’ve burned, and the approximate hours of smartphone battery life you’ve earned.

For backpackers, hikers, or people who live in places off the grid, Ampy shows promise. Solar panels only work when the sun shines, and cooking pots that generate energy require fuel to burn. Ampy just requires motion.

How Does Ampy Work?

Ampy’s cofounders — Tejas Shastry, Alex Smith and Mike Geier — met in an entrepreneurship class at Northwestern University while working on their engineering PhDs. Together, they managed to create a kinetic charging system that is three times smaller than the size of commercial kinetic chargers that could produce a similar amount of energy, they claimed.

Ampy can store about a week’s worth of physical activity and stay ready to use for months, but how much is that? The battery inside Ampy is a 1000 mAh battery, which is not enough to give newer smartphones a full charge. You can get a partial charge out of Ampy. However, once you drain it, you don’t have to go running around the airport, for example, to get a fresh charge — you can plug Ampy into an electrical outlet too.

Overall, the Ampy project is a little short of technical detail, which might be explained by the patent-pending proprietary inductor technology the team invented.

The little Ampy unit is 2.5 inches wide by 2.5 inches tall by .75 inches thick and weighs about as much as a smartphone (5 ounces). The case has rounded edges to fit being strapped to an arm or a leg. Inside, there’s a circuit board, a battery and two inductors.

Along the way to the Kickstarter Project, Ampy, which previously was named “myPower,” has won several awards, including the Clean Energy Trust Consumer Favorite Prize, the 1776 Global Challenge Cup Crowd Favorite, and the Energy Prize at the Northwestern University Venture Challenge — the last of which snagged the Ampy team US$20,000.

The team has fully tested its final working prototype, and it has lined up manufacturing partners to produce the first few thousand units.

Kickstarter pledges will help cover the manufacturing (tooling, materials, assembly) and other costs associated with bringing a retail-ready Ampy model to customers. The greatest potential for delay will be aligning manufacturing sources at competitive prices, but to lesson the risk, the Ampy design and project has been Dragon certified by manufacturing experts who believe the project has a high likelihood of being successful.

If you want in on the Ampy action, you can get an Ampy unit for a pledge of $85. For a $105 pledge, you can have an Ampy unit as well as a three-piece accessory pack that includes an Ampy protective sleeve, armband and clip. An Ampy 2-Pack with two accessory kits goes for $195, and a set of five in the Family and Friends pack goes for $425.