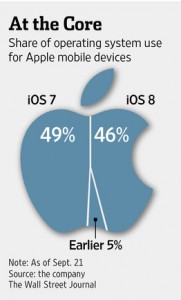 In a rare move Wednesday, the Cupertino, Calif., electronics maker yanked an update to its latest iPhone, iPad and iPod software hours after making it available. Some owners complained the software had disrupted their phone’s ability to make calls and disabled the TouchID fingerprint sensor used to unlock devices.

The software glitch followed reports that customers accidentally bent the iPhone 6 Plus—Apple’s largest and at $750 without contract its most-expensive phone—by sitting with the phone in their pants pocket. Videos of people bending the jumbo-sized iPhone with their hands quickly made the rounds on social media. 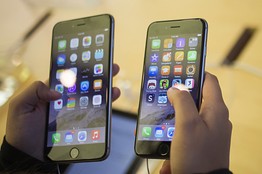 A customer holds an iPhone 6 and iPhone 6 Plus at the Apple store on Fifth Avenue. Reuters

Together, the issues are embarrassing for Apple at a time when it is hoping to sell a record number of phones. The negative publicity contrasts with largely favorable reviews for its new iPhones and Apple’s announcement of strong initial sales.

Apple confirmed it withdrew the update to its iOS 8 software, but declined to say how many people initially had downloaded it. The company also declined to address reports of the larger phones warping.

Apple recommended that users affected by the software problems connect their iPhones to a computer running iTunes to reinstall the previous version of iOS 8. In a statement, Apple apologized for the “great inconvenience” and said it is “working around the clock” to prepare an iOS 8 update for release in the next few days.

Ryan Orbuch, an app designer, said he installed the software update on his iPhone 6 as soon as it was available, but then noticed poor cellular reception and that TouchID wasn’t working. Apple “shouldn’t ship a [software] build like that,” he said.

It is not uncommon for updated versions of an operating system—especially one used by millions of people on different devices—to report issues in the early days after their release. Major product releases also tempt some people to perform extreme tests that aren’t indicative of everyday use, which then gain attention on social media.

“It’s a PR headache, but it doesn’t affect how consumers view Apple and it’s not a sign that something is fundamentally wrong at Apple today,” said Carolina Milanesi, chief of research at Kantar Worldpanel.

n early versions of 2011’s iOS 5 release, there were reports that the software was draining the phone’s battery. Its iOS 6, released in 2012, brought reports of poor connectivity and dropped calls; Apple issued an update to fix the issues. Apple didn’t respond to a question of whether it had previously withdrawn an iOS update.

Apple released the update, the first for its new iOS 8 operating system, earlier Wednesday with the goal of fixing various software bugs. About an hour after releasing the update, Apple pulled the new version of the software to investigate reports of problems.

Many consumer products—particularly those encased in malleable aluminum—will bend when enough pressure is applied. The question facing Apple owners is whether their iPhone 6 Plus could withstand a reasonable amount of force exerted from everyday activities like sitting.