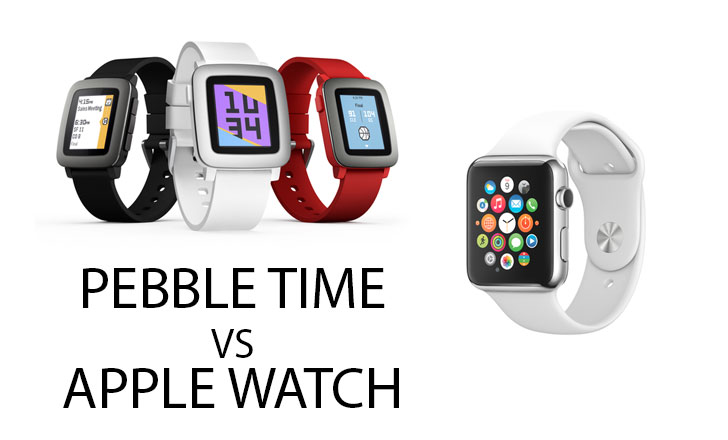 Pebble started the smartwatch revolution, Apple kicked it into high gear with the Apple Watch. Can the stunningly-successful Kickstarter-busting Pebble reclaim the throne with its new Pebble Time? Who wins the battle of the timekeepers?

For years, makers of digital watches or wearable tech have been trying to get it right. I mean, if we’re being picky, ‘smart’ watches have been around since Dick Tracy, but even the escalation of digital watch production in the 1980s was more about creating prototypes than best-selling, chart-topping products. Created by one of America’s most profitable companies (number 5 on the Fortune 500 if you were wondering) and backed by the world’s most recognizable brand, King Apple (Watch) has a lot of clout. But the gauntlet has been thrown down. Pebble, the original cross-platform smartwatch, is back with Pebble Time, a classier design, new voice features and software that works with both Android and iOS devices, a 7-day battery life and customizable smart straps.

Challenging Apple on design is an uphill struggle. Apple is renowned for its sleek, streamlined products, and the Apple Watch has the famously minimal design indicative of Apple products. The Apple Watch continues the same aluminium unibody design used in the iPhone and Macbooks and the seamlessly interwoven screen is protected by Gorilla Glass. (That means it’s strong, because gorillas are strong). Pebble has incorporated the same minimal no-nonsense design for their Pebble Time. It has a larger bezel, and the colours really pop out on the e-paper screen. The straps aren’t as premium when compared to the Apple Watch, but then again the Pebble Time’s retail price is substantially lower, pre-orders cost $199 compared to the Apple Watch’s distinctively pricier $699 ($449 for Apple Watch Sport). The Time is a sliver thinner than the Watch. It’s lighter too, which gives it a slight edge for active users. So, both have similar designs with the Watch edging ahead on aesthetics. The straps of the Time don’t look as premium in contrast to the Watch but that can be attributed to the Time’s lower retail price. Both watches are capable in the design department, however the Watch has a more premium look.

With the Time, Pebble went with a colour e-paper display, which is a big improvement on the last design. The screen has a lower resolution and only a 64-colour option, but what sets it miles apart from the Watch is the up to 7-day battery life, compared with the Watch’s 1 day (2 if you’re lucky). This is a major feature where the Time outshines the Watch, and the Time is always on, whereas the Watch switches on only when you hold the device to your face. The Apple Watch has a 1.5-inch Retina Display with a PPI on 290. Higher resolution, yes, more capable display, definitely, less battery power, unfortunately. Be prepared to plug your Watch in a lot more often than your Time. With the Watch you sacrifice power for prettiness, while Pebble can’t be beat on battery power. For more details check out this spec-by-spec comparison.

TIME FOR THE VERDICT. WATCH CAREFULLY.

The Watch ranks higher on capability and aesthetics. It’s an Apple product after all. But at half the price and with a whopping up to 7x more battery life Time is a worthy rival. Time is also phone-free; with Watch you will always need your iPhone at hand to power the Watch. If you already have an iPhone, then maybe it’s worth it. If not, look to spend a lot. If you’re an Apple loyalist you’ll buy the Watch anyway, but remember that what you make up for in aesthetic you lose in durability. For higher resolution and better capability, go with the Apple Watch. For durability with all the basic functionality you’ll require – telling the time, tracking fitness exercises, and managing notifications – you can’t beat the Pebble Time.

At Fix My Touch we are THE tech repair experts in Kelowna, if you have questions about your device contact us and we’ll get you fixed up right away!