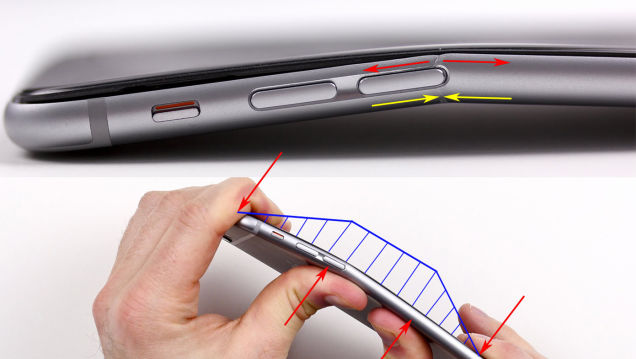 Why iPhone 6 Plus bends 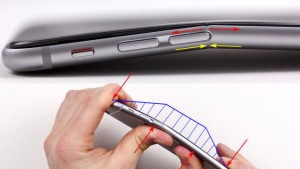 Pundits have blamed the iPhone 6 Plus bending non-scandal on dozens of potential issues, from the weak aluminum case to the crushing force of their own butts. But while we don’t know for sure about why a few phones have been bent, one here’s one plausible structural explanation with moment diagrams and everything.

A user by the name of alleras4 took to Imgur to speculate that the reportedly bendable body of the 6 Plus isn’t just due to the strength of the aluminum body. There’s no way to verify this is true, but it’s interesting to see how their explanation corresponds with iFixit’s teardown. They argue that the bending is caused by the design of a reinforcement inside the phone, behind the volume buttons. There, the metal reinforcement ends with a screw, leaving the body prone to stress.

“This means the metal insert isn’t able to absorb moment so close to the screw because it doesn’t have any other substantial point [to] hold on to thus it spins following the bending,” says alleras4. Here’s the view from iFixit’s teardown:

alleras4 explains that this is where the highest stresses accumulate, and he or she illustrates this using a moment diagram, above, which is a simple tool to draw where forces (in this case, your hands/butt) come down on a beam (in this case, the 6 Plus) and result in the largest moments (the points most prone to deformation, or bending). That also explains why most phones that we’ve seen bent—especially the one that was purposefully so—experienced the most stress in that particular spot.

In other words, it has nothing to do with strong thumbs or weight. It has to do with hitting the 6 Plus in a very specific place, from a specific angle, where Apple’s internal hardware design has a flaw:

[I]t’s not about if it bends or not, as seen in the video we know it does where other phones don’t or less so. It’s not about how much force must be applied and if a pocket will do the trick or not. It’s just that under a particular type of flexing, the phone is prone to bend mainly because a metal insert meant to reinforce instead spins in an axis too close to the critical point. If they were further apart allowing better support to counter the flexing and not spining, it would make it more resistant.

Of course, as alleras4 points out, this is based on simple structural logic and the teardown. There may be another explanation entirely. But it would also explain why official reports of bent iPhones are so limited, and why the normal every day use Apple says it will hold up to does seem like it should be fine.

So there you go: Wedge your iPhone into your tightest jeggings with impunity. Just don’t bend it at this one spot. [Imgur; Ifixit]