What product would you have Apple make better?

Apple has sent out invites for a special event on October 16, where the company

will almost certainly unveil this year’s updates to the iPad Air and iPad Mini. The event, which is being held on the Apple campus WOW at a much smaller venue than the iPhone 6 and 6 Plus launch, will probably also feature some updates to Apple’s other product lines, such as the iMac and Apple TV. There’s an outside chance that we’ll see something new and crazy on October 16, like a TV set, but I think it’s unlikely, considering the Apple Watch’s recent debut.

iPad Air2 on the left, iPad air on the right

Top of the menu for Apple’s October 18 event is a new iPad Air and iPad Mini with Retina display. There is a fairly persistent rumor that the next iPad Air — call it the iPad Air 2 if you like, or perhaps the iPad Air Plus — will feature a 12.9-inch screen. Just like with the iPhone 6, a number of sites have published leaked photos of what appears to be a thinner, lighter, and larger iPad Air.

It’s unclear what Apple will do with the iPad Mini with Retina display, but presumably it will get thinner and lighter. There’s no word on whether there’ll also be a 9.7-inch version of the iPad Air 2. With the iPhone 6 Plus at 5.5 inches, it’s possible to argue that the 7.9-inch iPad Mini doesn’t make a whole lot of sense — but we’ll have to wait and see what Apple unveils on October 16. 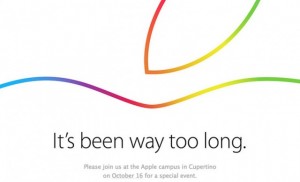 Apple should also unveil some other product updates at the October 16 event. We can only really guess what those products might be — but a new 27-inch iMac with Retina display(5120×2800) is possible. The invitation’s tease of “it’s been way too long” could indicate that the event will mostly focus on products that haven’t been updated in a while – Apple TV, the Mac Mini, and the iPod Nano are all overdue an update. Or maybe Apple is just being sarcastic, considering it had a big event just a couple of weeks ago to launch the iPhone 6 and 6 Plus.

The current Mac Mini was released way back in 2012We could also see a MacBook Air with Retina display, or even a brand new product. The invitation’s use of the original Apple rainbow colors could indicate that there’ll be a lot of Mac-related stuff at the event — Or that they’re possibly going to be bringing back something that was too good to have lost in the first place?

We’ll be following the event in Cupertino on the 16th either way, and will have blogs and photo albums posted as the announcements role out 🙂