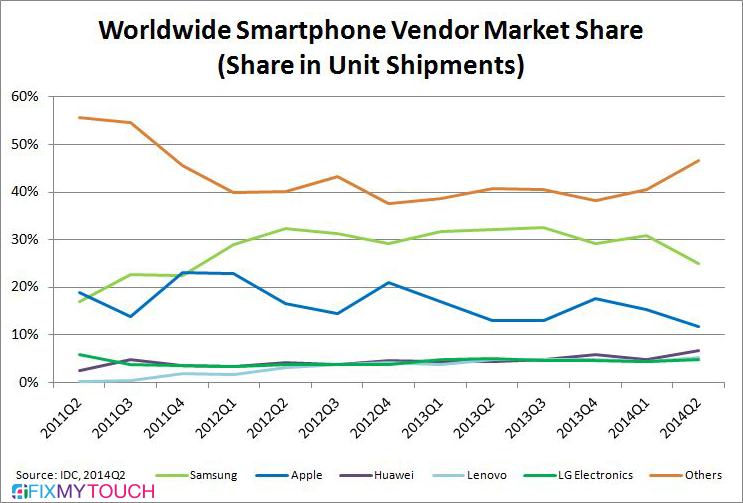 The worldwide smartphone market grew 25.3% year over year in the second quarter of 2014 (2014Q2), establishing a new single quarter record of 301.3 million shipments, according to data from the International Data Corporation (IDC) Worldwide Quarterly Mobile Phone Tracker. This is the first time ever quarterly smartphone shipments have surpassed the 300 million unit mark, representing a major milestone for the industry. Following a very strong first quarter, the market grew 5.2% sequentially, fueled by ongoing demand for mobile computing and an abundance of low-cost smartphones. Second quarter shipments were in line with IDC’s forecast and all expectations are that the market will continue apace in the second half of the year and will likely once again surpass 300 million units in 2014Q3. 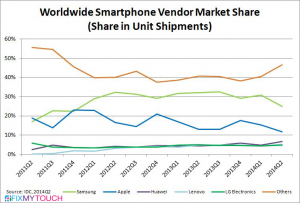 Samsung saw the Galaxy S5 ship over 18 million units this quarter, amidst the criticisms leveled at it. However, S4 and even S3 volumes persisted in the market as more affordable alternatives, together accounting for another 9 million. Collectively, Samsung lost 7% market share compared to a year ago, despite having one of the largest smartphone portfolios of all OEMs. To maintain its position at the top, Samsung will need to focus on building momentum in markets dominated by local brands.

Apple‘s second quarter is always the seasonal low of the year, but even more so this time in advance of the iPhone 6, with consumers holding a collective breath for the long-awaited bigger screens. Apple noted continued success in BRIC markets, a good sign of building its footprint in emerging markets. Given the pent up demand, the third quarter could be a drought or a flood, depending on the timing of the next launch.

Huawei‘s story centered on 4G LTE pick up, particularly in China, as all three national carriers subsidized 4G handsets like the P7 to encourage consumers to upgrade from 3G. Outside of China, large volumes of its lower-cost range, the Y series, fuelled growth across most regions. The company continues to focus on broadening its global reach, and results support that this momentum is undoubtedly there.

Lenovo a record quarter in China despite tremendous pressure from local brands. During the quarter, Lenovo had increased success from the A788T, as well as the 3G A388T. At the same time, even while its Motorola acquisition is undergoing approval, it continued to gain traction in international markets. While less than 5% of Lenovo’s shipments were registered outside of China in the second quarter of 2013, this share nearly tripled in 2014Q2, with emerging markets, particularly BRIIC countries, picking up the largest volumes.

LG volumes were largely driven by its L series, helped by models like the L70, which performed well in many markets including the United States. With the G3 launched at the end of the quarter in Korea, greater volumes are expected to show up in Q3.