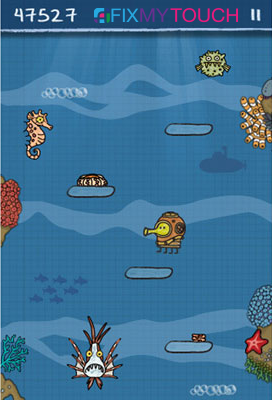 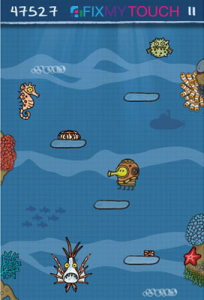 One of the top games today; Doodlejump is reviewed in Google Play Store as “Best friken game ever!” & “Doodle jump is AMAZING!! U could keep on playing for ever and ever. It is so addictive and fun!!” on Google Play Store. The game is also available for iOS users in iTunes. The point of the game is to see how high you can jump in many awesome worlds. The features are listed in Google Play Store as:
– Many fantastical worlds to play in – Ninja, Space, Jungle, Soccer, Underwater, Snow, Halloween, Ice, Easter and now PIRATES!
– Awesome power-ups to pick-up (JET PACKs, PROPELLER HATS, ROCKETS, trampolines…)
– Trippy obstacles to avoid (UFOs, black holes, and many, many monstrous monsters)
– Mad platforms to jump on (Broken, moving, disappearing, shifting, EXPLODING…)
– Global leaderboards, fun achievements! Beat your friends’ scores!
Doodle jump has even been seen on TV in shows and movies such as: Big Bang Theory, Parks & Rec, Bad Girls & Battleship
If you have enjoyed games like Angry Birds and Cut The Rope, this is for you!

Ridiculous Fishing gets a whopping 4.5 stars on both Google Play and iTunes. Who’d a thunk so many people would enjoy pulling sea life up, throwing it in the air and blasting it with a shotgun? Just fishing was no longer satisfactory, they had to resort to blowing up their catch and it sure is surprisingly satisfying! The game isn’t quite wildlife friendly, but it is all in good fun.
Gamezebo reports “The genius of Ridiculous Fishing comes from the fact that it’s actually three tightly woven mini games in one, which tie together in one of the most magnetic compulsion loops you’ll find.”
Joystiq says “It is unlike anything I’ve seen on any platform, an intricate arrangement of creatures, backdrops made entirely of 45-degree angles. Any screenshot you take of this game would make an amazing wallpaper – quite an achievement for a game about a guy sitting alone in a boat.”
Google Play lists the features:
* Hours of gameplay across the continents including a never-ending Infinite arcade world.
* Dozens of unlockables, weapons and items including popular fishing gear like the Most Expensive Hairdryer In The World and A Bowling Ball.
* Fish that become hats.
* No IAP – buy the game, play the game. No additional costs, no hidden fees. Even the hats are IAP-free.
* Fish that become hats.
Give it a try! Let us know what you think.
For the latest in new wearable technology check out our article “Fashion Week wearable devices”